A consummate competitor, Tia Clair-Toomey is the first woman to win the CrossFit Games three times. Aside from being a CrossFit athlete, she also qualified for the 2016 Rio Olympics as a weightlifter. She is considered as one of the all-time greats in a sport where the fittest will always come out on top. Do you want to know what makes this CrossFit athlete tick? Continue reading and find out. The Fittest Woman in the World

Before Tia Clair-Toomey became a three-time CrossFit Games winner, she was already an athlete. But she focused mainly on track and field with her dad as her coach. Shane Orr, who later became her husband, assisted her father when she was competing in track and field in high school.

Shane introduced functional fitness into her training after he discovered it through Rugby Union training. While she was initially unconvinced about the training, she started to find value in the sport as she attended more CrossFit classes. The training allowed her to develop overall symmetry in her strength.

CrossFit and the Olympics

Tia got into CrossFit in 2013 and learned the basics of weightlifting. After seeing her lift her previous personal best in clean and jerk, weightlifting coach Miles Wydall encouraged her to have a run at representing Australia in the 2016 Rio Olympic Games.

After seriously training for 18 months, Tia became one of the two Australian weightlifters to qualify for the Rio Olympics. With this, she became the first person to compete in the Olympics and CrossFit games in the same year. Moreover, she also won the gold medal at the 2018 Commonwealth Games in her weight category. Let us take a look at Tia Clair-Toomey’s results in some popular CrossFit exercises.

Prior to qualifying for the CrossFit Games, Tia already made an impact at the CrossFit Australian Open in 2015. Her performance in her native Australia was just a precursor to her impressive debut in the 2015 CrossFit Games where she placed second overall.

Tia later proved to naysayers that her rookie performance was no fluke after placing second the following year. She later started a three-year reign as the Fittest Woman in the World in the 2017 edition of the CrossFit Games. For the men, Mat Fraser managed to achieve the same impressive feat alongside her.

Tia Clair-Toomey already accomplished a lot even at a young age. Being a CrossFit Games winner and an Olympian means she has a lot of experience when it comes to CrossFit and Olympic training. With this, you may want to check out the following tips this top-level athlete has to give.

For Tia, she focuses her training on strength-based movements, such as clean and jerk, squats, and snatch pull. People may lose interest from repeating the same exercises day-in, day-out. To avoid this, Tia keeps things different every day.

Like many other elite athletes, she changes her routine every day. She may work on something complex one day, and it may change the next day. This allows her to make her training enjoyable since it’s always changing.

For Tia, it’s good to always look for the positives in life. You should avoid complicating your life and simply enjoy everything you experienced so far. Everything she experienced helped guide her to where she is today. She also believes more from your losses than from your wins.

Being well-hydrated is not the same as not feeling thirsty. You should have a bottle of water handy all the time.

For Tia, proper nutrition is necessary for you to reach your goals. Aside from allowing you to enhance your performance while competing, eating properly also allows you to recover properly. You should make sure you eat enough.

If you want to build muscles, you need to increase your calorie intake. She also has a source of protein right after training. Aside from allowing faster and easier recovery, it also helps in fat loss and muscle growth.

Having the right amount and quality of sleep will allow you to recover properly between workouts. This will allow your body to recover and regenerate tissues. It also allows you to recuperate mentally and restore hormonal balance. To get a good night’s rest, you should make sure to get at least eight to ten hours of sleep each night. You should also be well-fed and well-hydrated before hitting the sack.

When she started in the sport, Tia Clair-Toomey used to follow the Paleo diet since it was popular in the sport. But these days she focuses on what her body tells her rather than following the rigid diets of other people. For her, food is important since it can affect her performance.

Well, for breakfast she has bacon and eggs. She also has avocado and a green smoothie full-packed with vegetables. Lunch is typically steak, chips, and salad. Another lunch option is chicken and rice.

Tia also has a green smoothie with coconut water as an afternoon snack. This gives her the necessary rehydration and replenishment after sweating it out during training. She may also have a protein bar. A protein shake normally comes as a post-workout snack.

For dinner, she has chicken steak, lamb, or pork for her protein along with some vegetables. She also has avocado on her plate. Tia is also a big apple cider vinegar fan since it can help with digestion and fixes things insider her body. She also takes magnesium tablets, zinc tablets, and fish oil tablets as supplements in the morning. 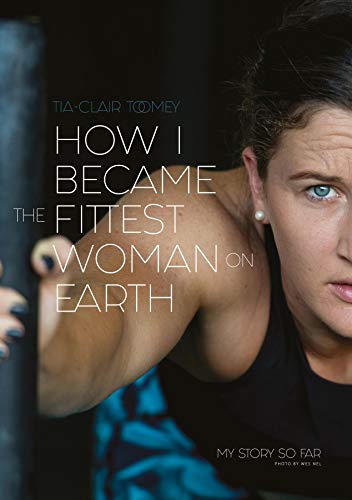 1,016 Reviews
How I Became The Fittest Woman On Earth: My Story So Far
Check Price on Amazon

Along with many other CrossFit stars, she’s written a popular book sharing her journey to becoming a dominant force at the Games called How I Became the Fittest Women on Earth: My Story So Far. It has some excellent reviews and it’s certainly an inspiring story with lots of glimpses into the behind the scenes of what it takes to become such an elite athlete.

Check it out for yourself on Amazon:

A Day in the Life of Tia Clair-Toomey

Are you interested in how Tia Clair-Toomey prepares for an Open competition? Then, check out the video below:

With her increasing popularity, Tia Clair-Toomey has become one of the most-followed CrossFit athletes on the planet. To date, she has more than 1.2 million followers and this number is getting bigger daily! She has more than 1500 posts filled with all sorts of tips, inspiration and behind the scenes stuff.

She also has her own website where you can check out videos of her workouts as well as get updates from Tia herself.

Winner of the 2019 CrossFit Games

Have your Say about Tia Clair-Toomey, CrossFit Athlete

Do you have any questions or comments about Tia Clair-Toomey? Let us know what’s on your mind in the comment box below. We’d love to hear from you.